CODEPINK: China Is Not Our Enemy with Julie Tang & Michael Wong 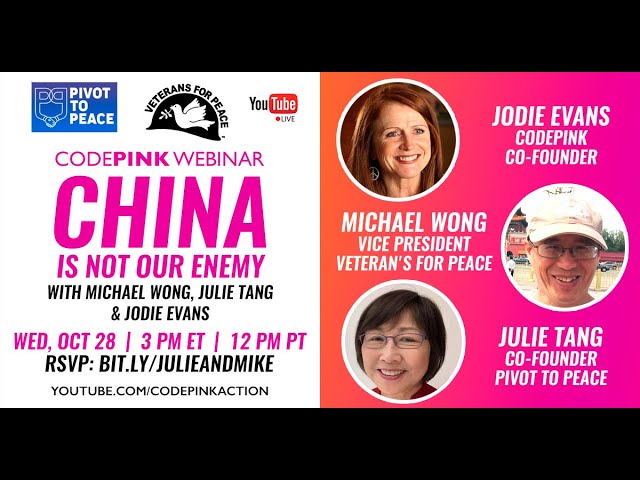 In this webinar CODEPINK’s co-founder Jodie Evans is in discussion with Julie Tang, co-founder of Pivot to Peace and Michael Wong, an activist for and member of Veteran’s for Peace. Julie Tang is a retired judge of the San Francisco Superior Court and previously, an Assistant District Attorney in San Francisco. Upon retirement in 2015, Judge Tang works as a part-time mediator and a full-time peace activist. In 2017, she helped co-found the ‘Comfort Women” Justice Coalition that built a “Comfort Women” Memorial in San Francisco. Previously, she had co-founded the “Rape of Nanjing” Redress Coalition in 1998. In 2020, she and a group of peace activists co-founded the “Pivot to Peace” organization dedicated to advocating for world peace, in particular, peace between the US and China. Michael Wong is the Vice President of Veterans For Peace, Chapter 69, San Francisco, and a retired social worker with a Master of Social Work degree. He is published in the anthologies, “Veterans of War, Veterans of Peace,” edited by Maxine Hong Kingston, and “Waging Peace in Vietnam,” edited by Ron Craver, David Cortright, and Barbara Doherty. He also appeared in the documentary “Sir! No Sir!” about the GI resistance to the Vietnam War. Jodie Evans has been a visionary advocate for peace for several decades. An inspired motivator, Jodie invigorates nascent activists and re-invigorates seasoned activists through her ever-evolving, always exciting methods to promote peace. Recently, she has been continuously collaborating with peace activists from across the world in uplifting that China Is Not Our Enemy. Her efforts have been featured in China Daily and An International Peace Forum through No Cold War.