Major Power Conflict: A Road to Nowhere – We Shouldn’t Take It 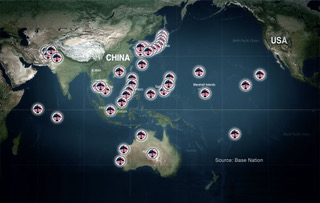 America’s military posture towards China has become one of outright hostility and confrontation. Our government has been pursuing a strategy of encirclement and containment, provocatively challenging China’s sovereignty and integrity. According to Secretary of Defense Mike Esper, in a speech referring to China, “The United States network of alliances and partnerships provides us an asymmetric strategic edge that our adversaries cannot match.” The Pentagon openly refers to its preparations for “major power conflict” in East Asia. These dramatic statements are both instances of a new aggressive mentality in Washington, and reflections of deeper American ambitions for power and dominance in Asia.

The seemingly debate-free adoption of a doctrine that prepares for “major power conflict” is a clear indicator that the new policy and doctrine need to be urgently and publicly challenged by people who believe in peace as a top priority. Otherwise the preparation for major power conflict will become a self-fulfilling prophesy. This is not acceptable. Major power conflict must be avoided. Promoting and working toward peace should be the top priority – not later but right now! We, in the Pivot to Peace, first insist that there must be a full scale nationwide debate over a policy/doctrine that leads to the potentiality of a third world war. The core assumptions in the major power conflict doctrine/policy are artificially constructed to manufacture consent for a policy of full spectrum confrontation with China. These assumptions are factually wrong, misleading, racist and camouflage a foundational premise that the United States must act as global hegemon.

Background to the Recent Pivot to Asia

Throughout the 19th and 20th centuries the United States pursued its economic and political interests across the Pacific Ocean, seeking to profit from the rich trade with China and to establish itself as a power in the East Asian region. As America assumed a role as global hegemon after World War II, East Asia became one of the areas within which it sought to maximize the profits of US businesses and to dominate the development of local economies. All of this took place under the umbrella of American military power, from the overthrow of the Hawaiian monarchy in 1895 to the atomic bombing of Japan in World War II to the War in Vietnam and beyond.

As the 21st century dawned the United States faced a changing world. Its place as the leading player in the global economy was eroding, and other nations, from Europe and Latin America to Asia, were less willing to follow in American footsteps. China’s emergence as a dynamic economic engine provided alternative models and sources of investment for development for poorer countries around the world. Business and political elites in the United States feared the waning of American domination of Asia most keenly.

In 2009 Barack Obama took office and declared himself the “first Pacific president” who would focus much of his foreign policy on Asia. In November 2011 Secretary of State Hillary Clinton published an article in the elite journal Foreign Policy entitled “America’s Pacific Century” outlining what became known as the Pivot to Asia: a greatly increased program of military and diplomatic activity aimed at containing the peaceful rise of the People’s Republic of China and maintaining, even expanding, American hegemony in Asia. 60% of US war capacity was shifted into the Pacific.

Under the Trump administration, an ever-growing hostility towards China has been embraced by politicians and pundits across the liberal-conservative spectrum. Fear of, and antagonism towards China have been promoted by Democrats like Chuck Schumer and Nancy Pelosi as well as by Republicans like Ted Cruz and Marco Rubio.

This bipartisan posture has been manifested across a wide range of issues, from provocative naval confrontations in the South China Sea, to the ongoing trade war, blatant interference in China’s internal affairs in Hong Kong, the censorship and repression of Confucius Institutes across America, and most recently, the racist anti-China blame game about the Covid-19 crisis. The dominant position that has emerged in the summits of the U.S. foreign policy and military establishment is that China is a new enemy state and that confrontation is the only path forward. That China’s rise out of under-development and poverty poses an existential threat to the United States and its influence as the world leader. Any argument by China that its rise can be a win-win formula rather than a zero sum game with the United States is dismissed out of hand as deceptive propaganda. Thus, the apparent consensus within the military and the foreign policy establishment seems intent on thwarting China’s development and its assumption of a responsible role in global affairs, and appears to be willing to use military force to “contain” China in a new effort to hold onto their dwindling control over the world’s wealth and the lives of working people everywhere.

Pivot to Peace Not War

Those who believe in peace are mortified that “responsible leaders” would prepare for major power conflict. Thus, we are compelled to act. The first step must be to bring public awareness to the utter folly of this new un-debated policy/doctrine that is driving the country and the world toward an avoidable catastrophe.